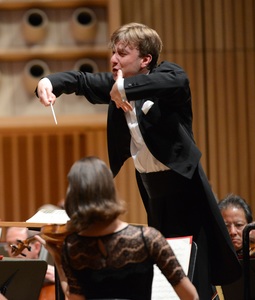 "Arming is an extremely graceful conductor and under his hand the romanticism of this most muscular and exuberant of the four Schumann symphonies [No. 3] came beautifully to light. He caressed phrasings in the third movement, brought out all the dancing/drinking song character of the scherzo, and [the] fourth movement was nobility itself."

On both the symphonic stage and in the opera house, Christian Arming is a highly sought-after conductor in North America, Europe, and Asia. He is currently Principal Guest Conductor of the Hiroshima Orchestra in Japan. Mr. Arming has been Music Director of the Royal Philharmonic Orchestra of Liège in Belgium, the New Japan Orchestra in Tokyo, and the Lucerne Opera Theatre and Orchestra. At the age of 24, he was appointed Chief Conductor of the Janáček Philharmonic in Ostrava, Czech Republic, a position he held from 1996 – 2002.

Recent North American highlights include debut engagements with the Indianapolis Symphony, Pacific Symphony, and the Fort Worth Symphony, as well as return engagements with the Aspen Chamber Orchestra and the Round Top Festival (Texas). In North America, Mr. Arming has also conducted the Boston, Atlanta, Cincinnati, St. Louis, Houston, Colorado, Fort Worth, New Jersey, Utah, and Vancouver symphonies. A regular guest conductor in Asia, he has worked with the NHK/Tokyo and Shanghai symphonies, in addition to the philharmonic orchestras of Taiwan and Malaysia. He has also toured Japan with the Royal Philharmonic Orchestra of Liège.

Equally at home with operatic repertoire, Mr. Arming’s 1997 debut at the Salzburg Festival led to two immediate re-engagements. Since then he has worked with the opera companies in Prague, Trieste, Lucerne, Strasbourg, and Frankfurt, as well as the Cincinnati Opera in the U.S. He also regularly returns to Tokyo to conduct opera productions in the Japanese capital.

Christian Arming’s discography includes a 2018 Deutsche Grammophon release with the Royal Philharmonic Orchestra of Liège and the Sirba Octet, a unique Klezmer ensemble made up of musicians from the Orchestre de Paris. He has also recorded for the Arte Nova and Rosa Classic labels with the Janáček Philharmonic; the Fontec label with the New Japan Philharmonic; Wagner arias with Russian bass-baritone Evgeny Nikitin for the Naïve label, in addition to a recording of the Frank Symphony in D Minor with the Liège Royal Philharmonic Orchestra, which won the Diapason d’Or.

Born in Vienna, Mr. Arming studied conducting under Leopold Hager at the University of Music and Performing Arts in Vienna. Seiji Ozawa, a long-time mentor and supporter, introduced Mr. Arming to audiences in Boston and Japan, where he continues to be an important presence in the orchestral and operatic scenes.