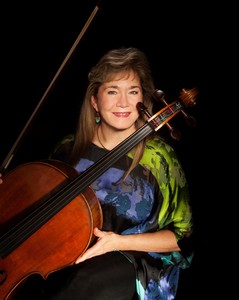 “Robinson captivated with her expressiveness and sense of timing, whether it was her use of rubato in solo phrases or her riveting opening to the finale [Brahms: Double Concerto]."

Winner of the Avery Fisher Recital Award, the Piatigorsky Memorial Award, the Pro Musicis Award, and a Grammy Nominee, cellist Sharon Robinson is recognized worldwide as a consummate artist and one of the most outstanding musicians of our time. Whether as a recitalist, soloist with orchestra, or member of the world-famous Kalichstein-Laredo-Robinson Trio, critics, audiences and fellow musicians respond to what the Indianapolis Star has called "A cellist who has simply been given the soul of Caruso." Her guest appearances with orchestras include the Philadelphia and Minnesota orchestras, the Los Angeles Philharmonic, the Boston, Baltimore, Cincinnati, Dallas, Houston, National, Pittsburgh, St. Louis, and San Francisco symphonies, and in Europe, the London Symphony, Helsinki Philharmonic, Zürich's Tonhalle Orchestra, and the English, Scottish, and Franz Lizst chamber orchestras.

Committed to the music of our time, Sharon Robinson works closely with many of today's leading composers, including Richard Danielpour, Katherine Hoover, Leon Kirchner, David Ludwig, Arvo Pärt, André Previn, Ned Rorem, Stanley Silverman, Andy Stein, Ellen Taaffe Zwilich, and Joan Tower. She is admired for consortium building, putting together multiple presenters as co-comissioners of both chamber music works and concertos with orchestra. For the Kalichstein-Laredo-Robinson Trio's 35th anniversary, she gathered twelve presenters to commission Ellen Taaffe Zwilich's Quintet, and for the 35th anniversary of her marriage to Jaime Laredo, she compiled eight co-commissioners for Richard Danielpour's Inventions on a Marriage.

Ms. Robinson and Jaime Laredo recently premiered André Previn’s Double Concerto for Violin, Cello and Orchestra, performing with the Orchestras of Cincinnati, Toronto, Detroit, Kansas City, Austin, and the Pacific Symphony in Orange County, California. In Europe, they premiered the Previn with the Swedish Chamber Orchestra and The Deutsche Kammerphilharmonie. Currently, the pair are celebrating their 40 years of marriage by assembling a coalition of orchestras to co-commission a new Double Concerto for them by Chris Brubeck.

Sharon Robinson divides her time among solo engagements, teaching, performing with her husband, violinist and conductor Jaime Laredo, and touring with the Kalichstein-Laredo-Robinson Trio. As of the Fall of 2012, she joined the renowned instrumental and chamber music faculty of the Cleveland Institute of Music. She previously taught at the Jacobs School of Music at Indiana University. Highly sought after for her dynamic master classes, she brings insight to her teaching from the rare combination of her lifetime experiences as member of the Houston Symphony Orchestra, the Ciompi String Quartet of Duke University, the Kalichstein-Laredo-Robinson Trio, plus countless solo recitals and concerto performances.

In 2009, Ms. Robinson, along with Mr. Laredo, became co-Artistic Director of the famed Linton Chamber Music Series in Cincinnati, Ohio. This important forum gathers musicians from around the globe in combination with soloists and members of the stellar Cincinnati Symphony Orchestra to explore beloved and innovative chamber works. The couple are also co-artistic directors of the Hudson Valley Chamber Music Circle at Bard College, and Artistic Advisors for the Brattleboro Music Center in Vermont.

Ms. Robinson's CDs include the Vivaldi Cello Sonatas on Vox and a Grenadilla disc of solo cello works by Debussy, Fauré, and Rorem. The Kalichstein-Laredo-Robinson Trio has recorded chamber works of Ravel; Legacies, a disc of commissioned works; and a two-CD set of the complete piano trios and sonatas by Shostakovich for KOCH International Classics. The Trio has also recorded the complete piano trios of Brahms and Mendelssohn for Vox as well as the Beethoven Triple Concerto for Chandos. Additionally, KOCH released Conversations, a Laredo/Robinson CD featuring duos by Handel, Gliere, Kodály, and a work composed for them by David Ott. Ms. Robinson received a Grammy nomination for the Two Brahms Sextets CD with Isaac Stern, Cho-Liang Lin, Jaime Laredo, Michael Tree, and Yo-Yo Ma. To celebrate Schubert's anniversary, that same ensemble (sans Michael Tree) recorded Schubert's great Cello Quintet for Sony, as well. In August 2002 KOCH released an all-Zwilich Concerto CD (including a double concerto written for Robinson and Laredo, and a triple concerto written for the Trio). Other releases included the Trio's 4-CD all-Beethoven project, and Danielpour's In the Arms of the Beloved. In 2006, Naxos released the Double Concerto by Ned Rorem, performed by Ms. Robinson and Mr. Laredo. Recently, BRIDGE Records released Triple Doubles, an album of three new Double Concertos written for the Duo by Daron Hagen, Richard Danielpour, and David Ludwig, plus the complete Schubert Trios with the Kalichstein-Laredo-Robinson Trio.