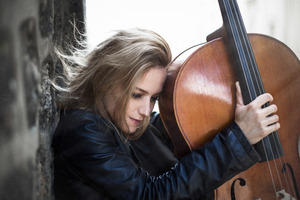 Following her stunning recital debut at Carnegie's Weill Hall, The Strad hailed Maja Bogdanovic for “an outstanding performance of exceptional tonal beauty and great maturity of interpretation." Since then, she has taken her place among today’s foremost cellists.

In the U.S., Ms. Bogdanovic made her debut at the 2017 Grand Teton Music Festival, playing Saint-Saëns Cello Concerto No. 1 under the baton of guest conductor Cristian Macelaru. She has also performed with the Spokane Symphony (Elgar Concerto) and twice with the Lubbock Symphony (Shostakovich Concerto No. 1 and Dvorák Concerto). This season, she brought the Dvorák Concerto to California for her debut with the Bakersfield Symphony. In 2018/2019, she returns to the Americas to make debuts with the Ft. Worth Symphony, performing the Saint-Saëns Concerto No. 1, as well as with the Minas Gerais Philharmonic in Belo Horizonte, Brazil, performing Friedrich Gulda's Cello Concerto. While in Texas, she will also appear with the Lubbock Symphony, playing the Schumann Concerto.

An avid chamber musician, Maja Bogdanovic performs regularly at the Kuhmo Festival in Finland, and has performed recently at the Stift International Chamber Music Festival in The Netherlands. Her appearances at many of the world’s leading venues and festivals include the Amphithéâtre Sorbonne, Amsterdamse Cello Biënnale, Festival de Radio France et Montpellier, Folles Journées/Nantes, Giverny Festival, Muziekgebouw/Amsterdam, Palais des Congrès/Nantes, Prinzregententheater/Munich, Salle Gaveau and Salle Pleyel/Paris, Tonhalle Düsseldorf, and the Zeist Festival in Holland. She concertizes regularly in Europe with pianists Maria Belooussova and Nino Gvetadze, and violinists Frederieke Saeijs and Namanja Radulovic.

Continuing her activities as a recording artist, Ms. Bogdanovic has produced several internationally-released CDs for the French label Lyrinx, as well as a Nimbus label recording of Philip Sawyers’s Concerto for Cello and Orchestra, dedicated to her by the composer. Her newest disc, EASTERN WIND (Orchid Classics), with pianist Maria Belooussova, features compositions for cello and piano by Glière and Rachmaninoff and has received rave reviews.

Within her wide repertoire, Maja Bogdanovic devotes a special place to contemporary music. She has premiered works of Nicolas Bacri, Sofia Gubaidulina, Ivan Jevtic, Krzysztof Penderecki, Philip Sawyers, Eric Tanguy, and Benjamin Yusupov, among others. Her collaboration with Krzysztof Penderecki began in France with the Orchestre National des Pays de la Loire, continued in Belgrade with the Belgrade Philharmonic, and in Ljubljana, where she performed his Cello Concerto No. 2 with the Slovenian Philharmonic conducted by the composer himself. Among a select group of the world’s leading artists, including Lorin Maazel, Anne-Sophie Mutter and others, she was invited to play for a special performance in Warsaw celebrating Penderecki’s 80th birthday, collaborating with Yuri Bashmet, Julian Rachlin, and Barry Douglas.

Born in Belgrade, Serbia, Maja Bogdanovic began playing the cello at a very early age, studying with Professor Nada Jovanovic at the Music School Kosta Manojlovic in Zemu. She went on to graduate with a First Prize from the Conservatoire National Supérieur de Musique de Paris, where she completed her postgraduate course with Michel Strauss; while there, she also studied chamber music with Itamar Golan and Pierre-Laurent Aimard. Following her studies in Paris, she pursued further training at the Universität der Künste Berlin with Professor Jens Peter Maintz, as well as Bernard Greenhouse, Alban Gerhardt, Young-Chang Cho, and Heinrich Schiff.

Ms. Bogdanovic’s instrument was custom made for her by French luthier Frank Ravatin. She currently divides her time between Chicago and Paris.