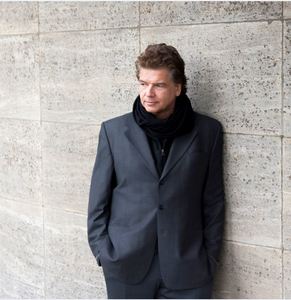 "We have heard Schubert's C Major Symphony, 'The Great,' several times in recent weeks; Fischer-Dieskau brought such formal unity and meaningful dramaturgy to the work that his interpretation approached the sensational."

Over the years, Martin Fischer-Dieskau has conducted nearly 100 orchestras, including the Berlin Philharmonic, Royal Philharmonic, London Philharmonic, Moscow State Orchestra, Orchestre national de France, the NHK Tokyo, the Tokyo Philharmonic, and the New Japan Philharmonic. He has led all the major orchestras of Germany and Scandinavia, as well as many Italian and Spanish orchestras. A scion of the 19th-century classical music tradition, he adds to this his keen sense and innovative flair for unusual and varied programming. At the Round Top Festival (TX) this past summer his astonisihing performance of an all-Berlioz program (conducted entirely from memory), including the seldom heard Romeo and Juliet Symphony, was a jaw-dropping re-entry into the American musical scene.

Mr. Fischer-Dieskau spent his early years in the German opera houses in Augsburg, Aachen, Hagen, and Stuttgart, learning his craft from the ground up. As Principal Conductor of the Bern Symphony Orchestra (1990-1994), he conducted a variety of contemporary, Russian, and Italian works. With the Canadian Kitchener-Waterloo (KW) Symphony, where he was Principal Conductor from 2000-2004, he augmented the orchestra’s standard repertoire and opened the concert hall to new audiences. In 2002, with the KW Symphony, he inaugurated the first German-Canadian Festival in Toronto. From 2009-2011, he was Music Director of the Taipei Symphony Orchestra, conducting a wide range of classical and Taiwanese repertoire while organizing an International Puccini symposium.

Early in his career, Martin Fischer-Dieskau led productions at the San Carlo Opera House in Naples and the Regio in Turin and became a frequent guest at international festivals, including Helsinki, Granada, and Berlin. In 2013, he followed these commitments with a tour of the German Radio Orchestra featuring Wagner and Verdi. Highlights of the 2015/2016 season were performances with new orchestras in China and Romania, conducting Beethoven’s Ninth. Following seasons included return engagements in Israel, France, The Netherlands, Finland, The Czech Republic, and the United States.

Mr. Fischer-Dieskau’s earliest success was a production of Haydn’s Il Mondo della Luna in his native Berlin in 1974. Soon afterward, his career was launched by an invitation from Seiji Ozawa to join the presitigious conducting program at the Tanglewood Music Center in 1978, funded by the Leonard Bernstein Scholarship; he had the privilege of attending again a decade later (1988), and then once more, in 1997. Following his first fellowship at Tanglewood, he was chosen by Antal Doráti to become Assistant Conductor at the Detroit Symphony.

Martin Fischer-Dieskau’s studies have included conducting, violin, and piano at the Hochschule für Musik in Vienna, the Universität der Künste in Berlin, and the Accademia Chigiana di Siena. He has participated in master classes with Franco Ferrara, Seiji Ozawa, and Leonard Bernstein. To this he added the study of Italian literature and musicology, earning a Ph.D. in 2015 from the Freie Universität Berlin and the Hochschule für Musik und Tanz in Cologne. In addition to recordings for the Marco Polo and BIS labels, Mr. Fischer-Dieskau established his own television series for the German ARD-TV channel for the purpose of introducing young musicians to wider audiences. He has also held a professorship at the Hochschule für Künste in Bremen.