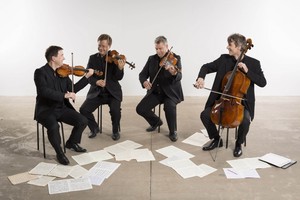 "This was not the kind of musical experience one could sensibly argue with. It was great music superbly played."

The Grammy-nominated Vogler Quartet celebrated its 30th anniversary during the 2015/2016 season, and, with all four of its original members, continues to build upon its reputation as one of the finest quartets of its generation. Mastering a repertoire of over two hundred works from all periods and musical styles, founding members Tim Vogler, Frank Reinecke, Stefan Fehlandt, and Stephan Forck are widely recognized for their uncommon musical intelligence, homogeneous sound, insightful interpretations, and unconventional programming. They have created a vibrant ensemble spirit, as well as a unique string quartet sound which consistently offers new insights into the genre. Formed in East Berlin in 1985, the quartet continues to pursue an ambitious international schedule of concerts and master classes in prestigious venues around the world.

In spring 2012, the Vogler Quartet returned to North America for a special collaboration with cabaret artist Ute Lemper and clarinetist/pianist Stefan Malzew, which not only included highly acclaimed concerts in Carnegie Hall and the Kennedy Center, among many others, but also resulted in a Grammy-nominated recording entitled “Paris Days/Berlin Nights” on the Sony label. This lively collaboration continued into the 2015/2016 season. Highlights of their most recent North American tour included a multi-concert residency at Chamber Music San Francisco and an appearance at Friends of Chamber Music Vancouver, in collaboration with pianist Ian Parker. The 2015/2016 season also featured additional engagements with Mr. Parker in selected venus throughout the Pacific Northwest.

The four musicians are as much at home in the musical centers of Europe as they are in America, Japan, Australia, and New Zealand, and have enjoyed a series of successes in expanding chamber music audiences worldwide. In 1993, the Vogler Quartet instituted its own concert series at the Konzerthaus in Berlin; and because of its great popularity, they now offer a parallel series in Neubrandenburg. In 2000, the quartet founded the annual chamber music festival “Music in Drumcliffe” in Sligo, Ireland, which brings together international artists for performances and workshops. In 2002, they took over the artistic direction of the chamber music festival at Homburg/Saar in Germany.

In addition to their concert activities, the musicians actively sponsor young talent, teaching classes at universities in Berlin, Leipzig, Stuttgart, and Dublin, and presenting master classes for professional quartets in Europe and overseas. From 2007 to 2012, the Vogler Quartet held the prestigious Chamber Music Residency at the Stuttgart Conservatory, a position previously held by the Melos Quartet.

The Vogler Quartet is also strongly committed to the performance of contemporary music. They performed Morton Feldman’s five-hour String Quartet No. 2 with tremendous success at the MusikBiennale in Berlin in 1999.  At EXPO 2000, all of Wolfgang Rihm’s string quartets were performed by the Vogler and Arditti Quartets. The Vogler Quartet regularly commissions and premieres new works, recently including quartets by Taner Akyol, Frank Michael Beyer, Moritz Eggert, Erhard Grosskopf, Mauricio Kagel, Jörg Widmann, and Ian Wilson.

Trained at the Hanns Eisler Music Institute in Berlin, the Vogler Quartet first attained recognition in 1986 after winning First Prize at the International String Quartet Competition in Evian, France. Shortly thereafter, BMG/RCA produced the first of many recordings for the quartet, later followed by Nimbus Records, Col Legno, and CPO. CPO has engaged the quartet in a project recording the complete quartets by Dvorák. Since 2005, they have recorded multiple times for Hänssler Classic (including works of Beethoven, Mendelssohn, and Schubert), as well as a CD of works by composers from the “New Jewish School” with clarinetist Chen Halevi and pianist Jasha Nemtsov. In 2011 they began a relationship with Sony Classical, releasing a recording of Golijov’s Dreams and Prayers of Isaac the Blind and the Mozart clarinet quintet, with clarinetist David Orlowsky. In April 2014, in collaboration with bandoneon player Marcelo Nisinman, they released a tango album on the Phil.Harmonie label, once again underscoring their extraordinary versatility.