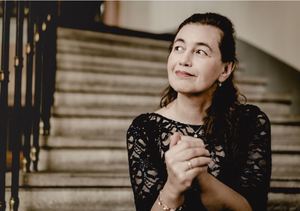 “Its youthful zest [Prokofiev Concerto No. 3] was displayed to the hilt by Zilberstein… More impressive was the graceful, almost effortless navigation of the music’s maddening alternation of the fast and furious with the soulfully lyrical.”

Since winning First Prize in the 1987 Busoni International Piano Competition, Lilya Zilberstein has established herself as one of the finest pianists in the world. In demand as soloist, chamber musician, and teacher, in 2014 she became the first woman to chair the classical piano department at the University of Music and Performing Arts in Vienna.

An enthusiastic recitalist, Lilya Zilberstein’s engagements include her recent debut at the Hamburg Elbphilharmonie in a duo recital with Martha Argerich, as well as Paris, Vienna, Florence, Dresden, Siena, Taipei, and Beijing, to name a few. Festival appearances include Campos do Jordao/Brazil, Ireland Chamber Music, Lugano, Mondsee, Peninsula, Chautauqua, Mostly Mozart (both in New York and Japan), and recently, the Salzburg Easter Festival, performing with musicians of the Staatskapelle Dresden.

Ms. Zilberstein has presented numerous recitals with Martha Argerich.  In addition to show-stopping performances in France, Germany, Italy, and Norway, a CD of the Brahms Sonata for Two Pianos played by Ms. Zilberstein and Ms. Argerich was released in 2003. Highlights of recent collaborations with Martha Argerich include performances in Hamburg and Bremen. Ms. Zilberstein has also toured extensively with Russian violinist Maxim Vengerov in the United States, Canada, and Europe. Featured on the EMI recording Martha Argerich and Friends: Live from the Lugano Festival, Mr. Vengerov’s and Ms. Zilberstein’s performance of the Brahms Sonata No. 3 for Violin and Piano won a Grammy nomination for best classical CD, and best chamber music performance. She has recorded eight CDs for Deutsche Grammophon, including the Rachmaninoff Concerto Nos. 2 and 3 with Claudio Abbado and the Berlin Philharmonic, and the Grieg Concerto with Neeme Järvi and the Göteborg Symphony.

A new collaboration is developing between Lilya Zilberstein and her two sons, Daniel and Anton, both of whom have become excellent pianists.  They have toured as a family all over Italy and appear occasionally in North America.

Ms. Zilberstein has recorded extensively for Deutsche Grammophon, including the Rachmaninoff Concerti Nos. 2 and 3 with Claudio Abbado and the Berlin Philharmonic; the Grieg Concerto with Neeme Järvi and the Göteborg Symphony; and solo works of Rachmaninoff, Shostakovich, Mussorgsky, Liszt, Schubert, Brahms, Debussy, Ravel, and Chopin. On a recent recording, released in 2014 on the Oehms label, she is featured with the Gürzenich Orchestra/Cologne under Dmitri Kitajenko, playing Tchaikovsky’s Piano Concerto No. 3.

A native of Moscow, Lilya Zilberstein is a graduate of the Gnessin Pedagogical Institute. In addition to the Busoni Competition Gold Medal, she was named “1998 Prizewinner” of the Accademia Musicale Chigiana in Siena, Italy (other recipients include Gidon Kremer, Anne-Sophie Mutter and Esa-Pekka Salonen). After her 25-year tenure as Guest Professor of Piano at the Hamburg Musikhochschule, she and her family moved to Vienna to begin her new position at the University of Music and Performing Arts in Vienna.